​​Deutsch Pu'u Sr a.k.a. SIBAK Dee or Coach Dee     Born in Landstuhl Germany raised in American Samoa. Dee grew up Fishing, Hunting, and fighting.Coach Dee is a US Army (retired) Combat Veteran with a total of 9 combat tours.Coach Dee started his journey in Martial Arts at the age of 4, training in Boxing under his late father who was at the time an assistant National Boxing Team coach in American Samoa, simultaneously he was also training in Sil Lum Kungfu under Master Sunako Simi.     Dee is a former World Champ in Kickboxing, Muay Thai, and MMA. He is a 2nd Degree Black Belt in KAJUKENBO under the tutelage of Professor Joseph Solis, and Grandmaster Bill Sills. He is also a former training and sparring partner to former Undisputed World Boxing Champion Wladimir Klitschko. He began his career as an amateur Boxer racking up multiple Amateur Championships to include American Samoa Jr National Champion, American Samoa National Championship, Hawaii State Boxing Champ, multiple US Army Europe boxing Championships, multiple US Armed Forces Europe Boxing Championships, US Army All Army Boxing Champion, US Armed Forces boxing Silver medalist. He is also a former member of the US Army World Class Athlete Program (WCAP) where he was under the tutelage of former Team USA Boxing Head Coach Basheer Abdullah.     Coach Dee began his career in pro MMA, Kickboxing and Muay Thai in Honolulu Hawaii after he placed 3rd in the 2003 Western Olympic Boxing Trials in Bakersfield California. He was signed by the world renown "K1" kickboxing organization based out of Japan and was able to travel the world to fight in Europe and Asia. Dee is also known as the "Godfather of MMA" in American Samoa, in 2009 Dee created a local nonprofit MMA gym and introduced the sport in his home of American Samoa where he taught pro bono and promoted the sport of Mixed Martial Arts. In 2010 while He was teaching MMA at another one of his Non-Profit gyms in Waipahu Hawaii, he was commended, recognized and awarded by the then Honolulu Mayor Peter Carlisle for his work.In July 2017 and after many years of No-Gi Jiujitsu he finally started training in a Gi in Brazilian Jiujitsu and is currently a brown belt under the tutelage of Professor Gaspar Agabin and Senior Professor Walter Vital.

Isaac who was recently promoted to brown belt on May 24, 2021 by Professor Walter "Cascao" Vital,  began training in  Jiu jitsu at the age of 4.  Started competing at the age of 6.   Isaac has trained under various coaches such as John Lewis, Dave Howard, Marc Laimon, Robert Drysdale and many more. He started to wrestle at the age of 9. Isaac has been practicing the art of Jiu jitsu for 13 years. Growing up on the mats, he has competed in Jiu Jitsu, Wrestling, Pankration, Judo, Boxing and Kickboxing. He competed in various Jiu Jitsu tournaments including: IBJJF, Grapplers Quest, Naga, Jiu Jitsu World League, Abu Dhabi Pro World Trials, Fuji Bjj, Nabjjf, FightBlok, Bjj Tour, and Newbreed. He has competed in wrestling tournaments ranging from Beehive Brawl, U.S Nationals, Terminator, and many USA wrestling tournaments.
Since then, he has competed at the adult and teen level while also competing in the high school level of wrestling. Isaac currently teaches the 9th Isle Bjj kids’ team while simultaneously competing and continuing to further his career in both sports of Wrestling and Jiu Jitsu. He continues to push himself and his peers to better themselves as people and competitors.  Isaac constantly continues to try and better 9th Isle Bjj as a family and team. Coach Isaac has just been awarded a Wrestling and Accademic Scholarship to Concordia University of Nebraska and will start in fall of 2021. Isaac will still continue to coach and teach while on leave from college. Both on and off the mats Isaac sets an example for the next generation of 9th Isle Ikaika.
3x Regional Placer
2x State Qualifier
1x State Placer 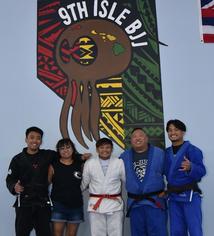 YATHZIRY "JEX" ZARATE was born in Arizona and raised in Mexico and Las Vegas. She has been training at 9th isle bjj for 3 years now. Her love for jiu jitsu shows through all of her past competitions from Fuji BJJ taking silver, to Womens cup where she took Gold, and continuing to compete in super fights, jiu jitsu world league, etc. She was promoted to Blue belt and began helping coach in kids classes. She was awarded her purple belt under Professor Walter "Cascao" Vital becoming an official assistant coach in the kids program, and aspiring to become the lead of the Womens Jiu Jitsu program as well.

Tofilua “Tofi” Mika aka The Comeback Kid
Born & raised in Waianae, HI. Joined kickboxing, boxing, & mixed martial arts in 2008 with team Sit You Down aka SYD under direction of coaches Mike Laikupu & John Vistante. 2011 Tofi became a part of TCK - Total Control Kickboxing with his coach & then mentor Mike Laikupu. This became another hobby for Tofi, something that would help him to stay off the streets & out of trouble and he grew to love and enjoy the sport.
He currently holds the SEC 135lb XMA championship & has defended the title 3 times before moving to Las Vegas from Hawai’i. He also has over 25+ fights under his belt in kickboxing, Muay Thai, and MMA combined with his bouts in Hawai’i, California, and Nevada.
In 2015 he left his home in Hawai’i to venture out & see what opportunities the “9th island” had to offer, shortly after moving to Las Vegas he joined team HFA - Hawaiian Fighting Arts under coach Deustch Pu’u and a few months later in the year 2016 he joined the 9th Isle BJJ ‘Ohana. He now holds a purple belt in Brazilian jiu jitsu under professor Gaspar “Jun bug” Agabin and professor Walter “Cascao” Vital.
We hope to have you all apart of the 9th Isle BJJ ‘Ohana 🤙🏽

Treston “TK” Kaneao was born and raised in Kaneohe, Hawaii.  He joined the United States Air Force in 2004 as a Aircraft Armament Systems Technician.  His first duty station was Luke AFB Arizona.  In 2007, this is where he started his journey in NoGi Jiu Jitsu where he trained at MMA Lab under Professor John Crouch a black belt under the legend Royce Gracie. As his career progressed in the Air Force, he got stationed at Nellis AFB in Las Vegas, NV (2011).   In 2012 he made his way back on the mats and decided to join Cobra Kai Jiu Jitsu under Professor Sim Go.  This is where he started training full time in Gi only.  After moving to NW Las Vegas in 2015 he had to find another gym closer to his residence.  After narrowing down gyms….  He decide to try out 9th Isle BJJ!  And the rest is history!!! He has been at 9th isle since 2015 and currently hold a Brown Belt under the guidance of Professor Gaspar “Jun Bug” Agabin and Professor Walter “Cascao” Vital.  All his belt accomplishment have come from Professor Jun Bug and Professor Cascao.  Winners/placer of multiple BJJ Tour, Submission Kings, NABJJF, Five Grappling, Grappling Industries, Naga, JJWL, Fuji, and IBJJF Tournaments.  Keep the Faith, Fight Good Fight, & Finish the Race!! Aloha! 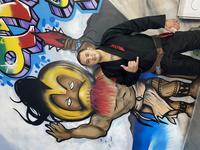 ​​CALVIN "CJ" AGABIN
CALVIN WAS PROMOTED TO BLACK BELT ON JUNE 12, 2021 UNDER PROFESSOR WALTER “CASCAO” VITAL.  HIS JOURNEY OF JIU JITSU STARTED AT THE AGE OF 5.  HE'S HAD THE PRIVILEGE OF TRAINING UNDER MANY TALENTED TEACHERS SUCH AS PROFESSOR JOHN LEWIS AT J-SECT, COACH ULYSSES GOMEZ AT COBRA KAI, PROFESSOR ROBERT DRYSDALE AT ZENITH BJJ, AND FINALLY PRESENTLY UNDER PROFESSOR WALTER “CASCAO” VITAL AT CASCAO JIU JITSU. HE IS CURRENTLY A 12 TIME NAGA CHAMPION, 5 TIME GRAPPLERS QUEST CHAMPION, AND A 1 TIME BEST IN THE WEST CHAMPION, THE CURRENT 125 LB CADET DIVISION CHAMPION,  NEWCOMERS CHAMPION, AND FINALIST IN THE FIGHTBLOK 4 MAN SUPER FIGHT TEEN TOURNAMENT.  HE STILL ACTIVELY TEACHES WHEN EVER HE ENDS UP IN LAS VEGAS ON LEAVE . " I AM HONORED AND BLESSED THAT MY JIU JITSU JOURNEY IS STRONG AND ALIVE AND STILL THRIVING! “OSS“ 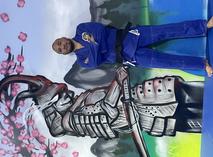 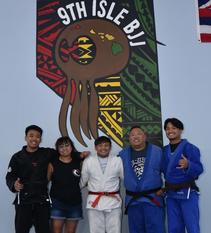